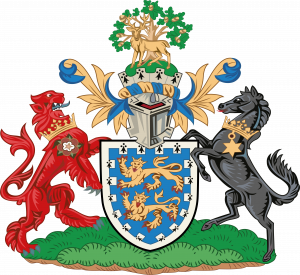 2010: Lady Catherine May Stevenson of Ascot

Notable past High Sheriffs of Berkshire

The Office of High Sheriff dates from Saxon Times, and is over a thousand years old. The name derives from the Anglo-Saxon “Scir-gerefa”, or “shire-reeve”. Under the Saxons, the holder of this post had powers of arrest, raised armies, and collected taxes. He had extensive powers and presided over courts, dealt with traitors and supervised all that went on in the shire, on the King’s behalf. The Sheriff’s law enforcement powers included raising a “Hue and Cry” (from the Norman French), and under “Posse Comitatus” (in Latin: the power of the community), organising or conscripting any able bodied man to serve in keeping the King’s peace and pursuing criminals.

The first recorded High Sheriff of Berkshire is Godric who served under the last Anglo-Saxon King, Harold Godwinson, in the 11th Century, and it is thought he died at the Battle of Hastings.

Seal of Richard, Earl of Cornwall

Richard, the second son of King John (born in 1209) became possibly the youngest High Sheriff of Berkshire when he was appointed to the post when just eight years old. In 1225, when just sixteen, he was given Cornwall as a birthday present and became the first Earl of Cornwall. His impressive array of titles did not stop there. In 1256, Richard acquired the title “King of Germany” by election and in May 1257 he was crowned “King of the Romans”, in Aachen. John Golafre lived at Fyfield Manor and was a courtier to Richard II. He served as High Sheriff of Berkshire in 1404. After the Battle of Agincourt, he helped Henry V govern occupied France north of the Loire. He died in 1442, and is remembered by a remarkable monument in Fyfield church. Monument to Thomas Chaucer and his wife Matilda, Ewelme Church

Thomas Chaucer (1367? – 1434) was the Speaker of the English House of Commons and son of Geoffrey Chaucer.  He served as High Sheriff of Berkshire and Oxfordshire for 1400 and 1403. His brass monument is in Ewelme Church.

Sir John Norreys (1400 – 166) was born in Bray, Berkshire and served twice as High Sheriff of Berkshire and Oxfordshire in 1452 and 1457. He was appointed Keeper of the Wardrobe to Henry VI.

Sir Thomas De La Mare (1420-1492) was High Sheriff of Berkshire 1459 and 1480. Sir Thomas was involved in the “Wars of the Roses” as a Lancastrian. In December 1459, he was ordered  “to resist the rebellion of Richard, Duke of York … attainted of high treason”. The following year, he was to call arms “all persons in the county of Berkshire able to labour” to resist the Duke and his party. During the conflict, Thomas was taken as prisoner and was absent from court on the death of the Duke of York, the declaration of his son as Edward IV and the expulsion of King Henry. He was pardoned, along with many other Lancastrians in February 1462 and returned to local affairs.

Sir Thomas seems to have become disaffected with Richard III and was attainted by the 1484 Parliament as one of the “false traitors and rebels” gathered at Newbury. He escaped capture and  claimed sanctuary at Sion Abbey (Middlesex) where he stayed in exile until his death in 1492.

Sir Henry Neville (1520- 1593) of Billingbear House Berkshire, was High Sheriff of Berkshire in 1572. He was appointed Gentleman of the Privy Chamber to King Henry VIII despite the fact that his father had been executed for treason by the King. His monument is in the church of Waltham St Lawrence.

Richard Lovelace, 1st Baron Lovelace (1564 – 1634) of Hurley, became High Sheriff of Berkshire in 1610. Lovelace became a soldier and commanded a force under the Lord Lieutenant in Ireland, after which he was knighted by the Earl of Essex in 1579. His association with the earl led to a brief period of imprisonment on charges of plotting against Queen Elizabeth I but he was released without charge. In 1627 he was created Baron Lovelace of Hurley by Charles I.

Sir Morris Ximenes,  (1762 – 1837) was a captain in the British Army and a member of the Stock Exchange. He converted to Anglicanism from Judaism. He was appointed High Sheriff of Berkshire in 1805 and later followed a military career, serving in the Peninsular War.

John Walter , (1776 – 1847) was the son of John Walter the founder of the Times newspaper. He became the paper’s second editor. In 1830 he bought the Bearwood estate in Berkshire and served as High Sheriff in the same year. Colonel Francis Ricardo, (1852 – 1924) was a police officer, British Army officer, and philanthropist. During the First World War he served as acting chief constable of Berkshire County Constabulary. He was involved with organising the Coronation of King Edward VII in August 1902. He was a great philanthropist and set up a reading in room in the village of Cookham in 1911, by purchasing the old Wesleyan Chapel. This building later became the Stanley Spencer gallery. As he drove round the village in a yellow Rolls-Royce, he is said to have been Kenneth Grahame’s inspiration for Toad of Toad Hall in Wind in the Willows. Charles Keyser FSA (1847 – 1929) was a British stockbroker and authority on English church architecture. In 1879, Keyser was appointed as a Fellow of the Society of Antiquaries due to his writings and lectures on English church architecture. In 1883, he wrote for the South Kensington Museum about buildings in Great Britain with mural paintings. He became president of the British Archaeological Association in 1906. He was appointed High Sheriff of Berkshire in 1898 and became Lord of the Manor of Aldermaston.

Rodney Palmer (1907 – 1987) was an English cricketer. He played for Hampshire County Cricket Club between 1930 and 1933. He also played first-class cricket for Cambridge University and minor counties cricket for Berkshire. He served in World War II and was awarded the Military Cross in 1943 in recognition of gallant and distinguished services in the Middle East. He was High Sheriff of Berkshire in 1953. Sir Mortimer Singer, (1863 – 1929) was an Anglo-American landowner, philanthropist, and sportsman, who was one of the earliest pilots in both France and the United Kingdom. Singer was born in 1863 in Yonkers, New York, and was son of Isaac Singer, the founder of the Singer Sewing Machine Company. In May 1910, he became the eighth person in the United Kingdom to hold a pilot’s certificate from the Royal Aero Club. He was appointed High Sheriff of Berkshire in 1921.