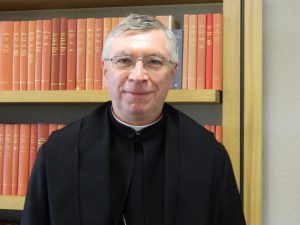 Abbot Geoffrey has been abbot of Douai Abbey since 1998. Douai Abbey is an English Benedictine abbey, founded In Paris in 1615, transferred to Douai in northern France in 1818, and settled in Woolhampton from 1903.

The present community numbers 21 members. At Woolhampton, besides the celebration of the Office in the abbey church, the monks are engaged in welcoming guests among whom are readers to the library and archive. The Community looks after the Woolhampton parish which includes Pangbourne and Theale. Other members of the community serve parishes elsewhere in England, including Ormskirk in Lancashire and Stratford-upon-Avon. One monk is on the staff of the primatial abbey of Sant’Anselmo in Rome, and another is chaplain to Cambridge University.

Abbot Geoffrey sits on a number of charitable trusts, is a member of the Abbot President’s Council, and lectures in history at Blackfriars Hall, Oxford University. He has lived in Berkshire since 1962 and, as abbot , has been involved in educational and ecumenical work within the Royal County. He is a neighbour of the present High Sheriff and looks forward in 2021-2022 to serving the people of Berkshire at the county and local level, and hopes to be involved in celebrating the 900th anniversary of the foundation of Reading Abbey (1121-2021).